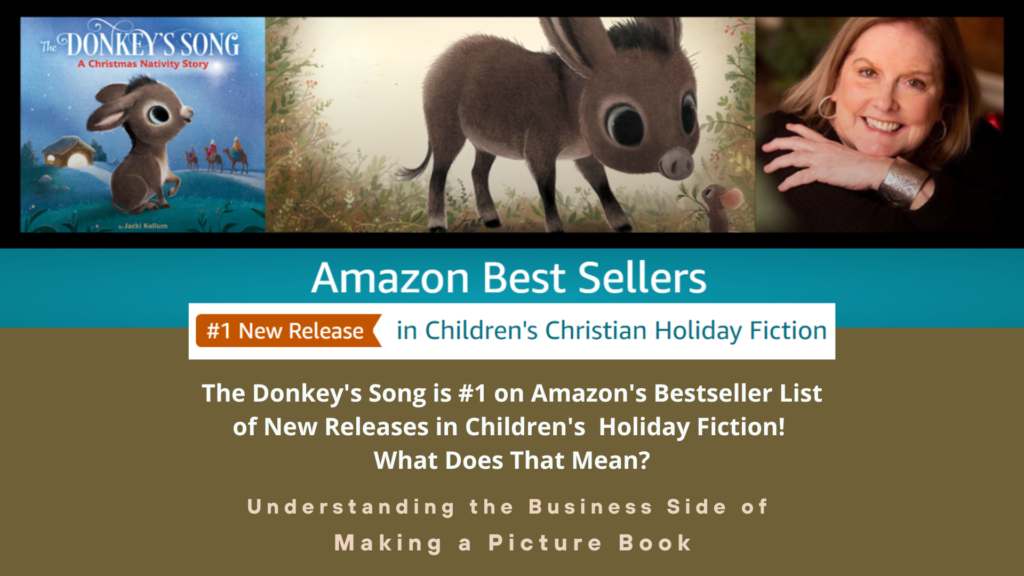 I have wanted to post something about Amazon’s ratings for a while, and I decided that this might be a good time to tell you what I know about this Amazon service that is vital for writers. In September, I’ll launch my #PBChallenge, and in that Challenge, I’ll share a bit more about the Publishing part of making a book. 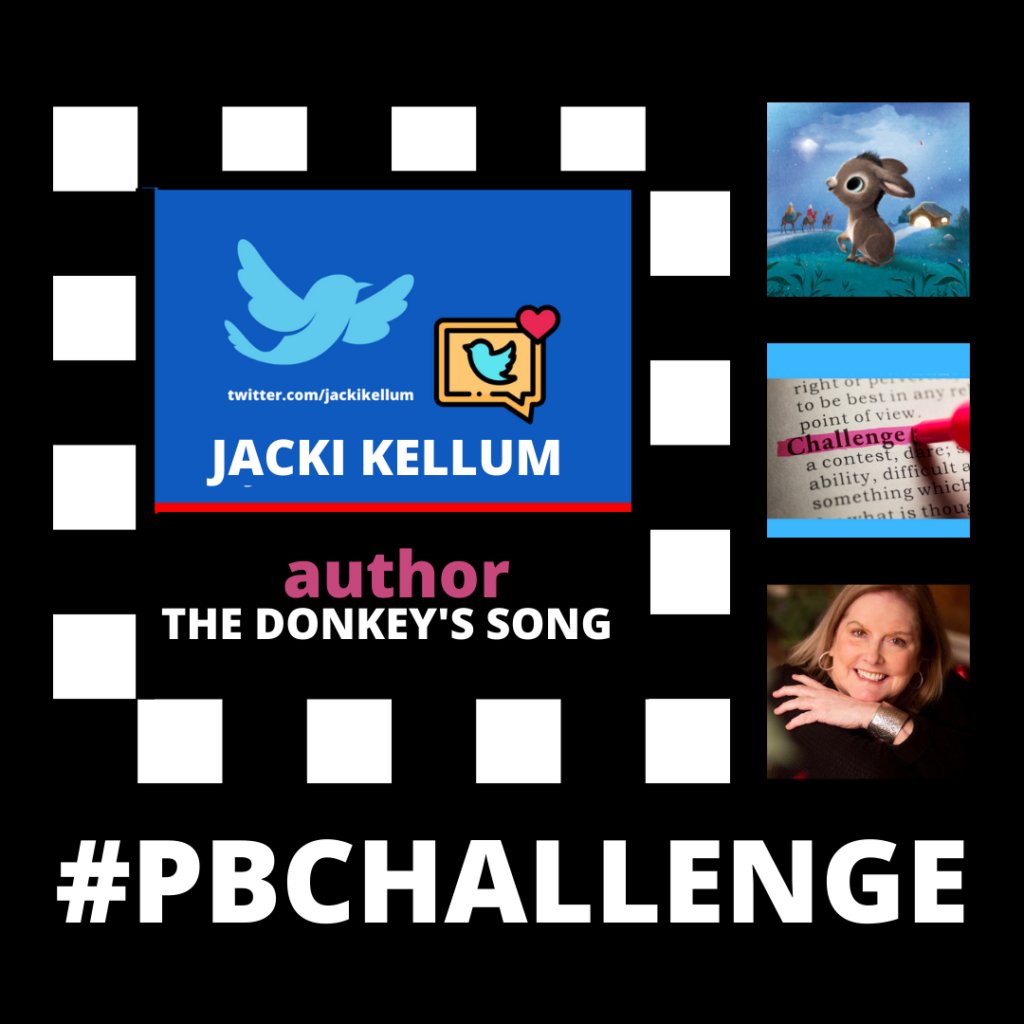 What IS the 28 Day Picture Book Challenge? #PBChallenge

Writing is a fraction of what makes a book succeed. A writer needs to also take care of marketing and other business concerns. Understanding Amazon’s ratings is part of marketing a book. 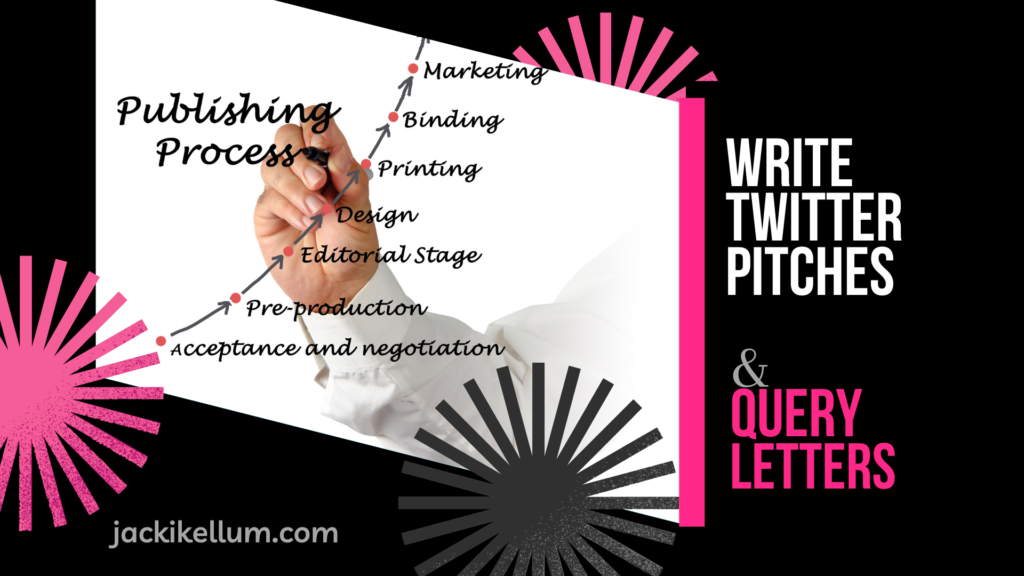 I want to kick off my discussion of the Amazon Best Seller Lists by saying that watching how a book’s numbers rise and fall is a Slippery Slope. The ratings for the lists update every hour.  I am fortunate that Donkey’s Song is #1 on a list now, but that will change. Even though the ratings change rapidly, however, understanding Amazon’s numbers is helpful for writers.

Children’s Christian Holiday Fiction is simply one of many different lists among Amazon’s Bestsellers. A traditionally published author doesn’t choose on what lists his books will be rated on Amazon. Amazon makes those decisions.

But I said that Donkey’s Song was #1, and the summary above says that it is #29, Writing is a fraction of what makes a book succeed. A writer needs to also take care of marketing and other business concerns. Understanding Amazon’s ratings is part of marketing a book.is only #1 in New Releases in  Children’s Christian Holiday Fiction. The New Releases lists are entirely different lists.  Donkey’s Song is #29 on the entire list of the Top 100 Children’s Christian Holiday Fiction Books.  A list contains 100 books. Almost all of the other 100 books on the list of Children’s Christian Holiday Fiction are not actually new books at all. Most of the other 100 books are releases of old standards. They have simply been re-released in different formats. Here’s a snippet of that list today: 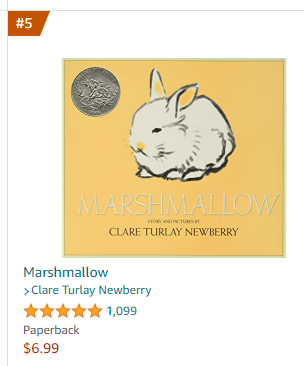 On August 5, the paperback version of Marshmallow was #5. That is an oldie but goldie book, and it won the Caldecott award in 1943. It is still doing well, however. 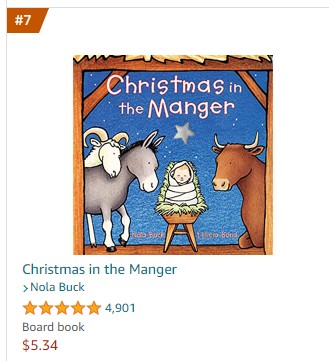 #7 is the board book version of Christmas in the Manger. This is a precious book that was first published as a hardcover in 1998. 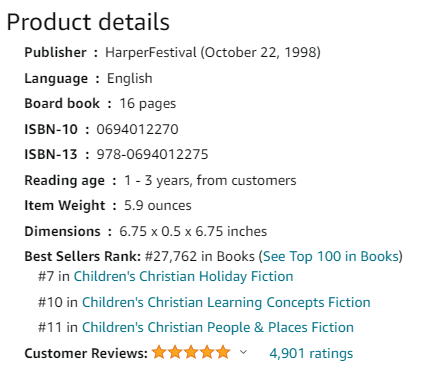 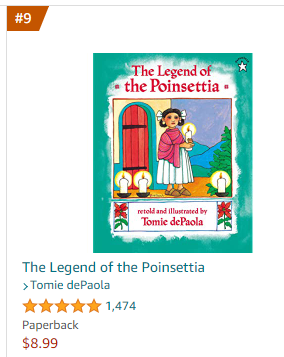 #9 is the paperback version of The Legend of the Poinsettia, which is by Tomie dePaola, who was a giant in the picture book industry for many years. Poinsettia was first released as a paperback in 1997, It was released as a hardcover book before that time. 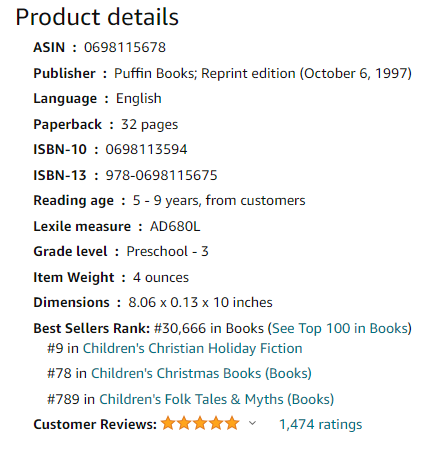 The hardcover version of Poinsettia was published in 1994, and it is not ranking nearly as well as the paperback version is ranking on August 5, 2022 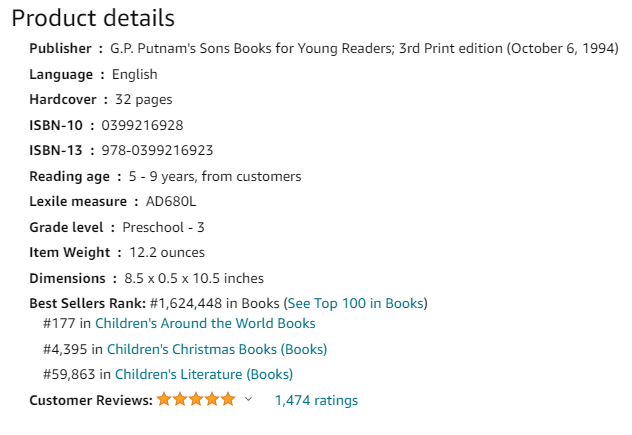 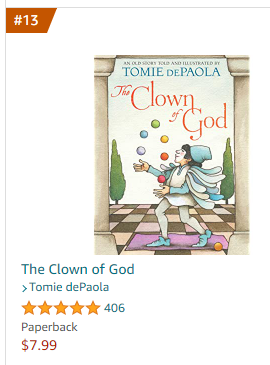 #13 is the paperback version of The Clown of God, which is also by Tomie dePaola.

“This beautiful new edition of Tomie dePaola’s 1978 classic retelling of a French legend stars a little juggler whose unique talent leads him to what might be a Christmas miracle.” Amazon

On August 5, 2022, the hardcover version of The Clown of God  ranked as follows: 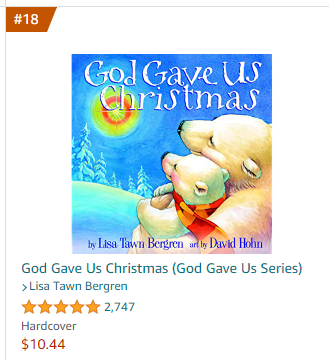 This book is an “ECPA BESTSELLER [ ECPA is the association of Christian publishers -The Evangelical Christian Publishers Association – ECPA ] • Over one million copies sold!” Amazon 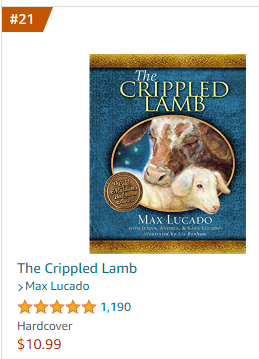 On August 5, a Max Lucado book was #21.  Max Lucado is a giant in Christian publishing. The Crippled Lamb was first published in 2011. 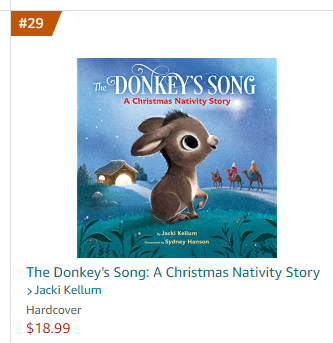 And here is Donkey. At about midnight on August 5, Donkey’s numbers were lower than they were two hours later. That’s the Slippery Slope of Amazon ratings. : 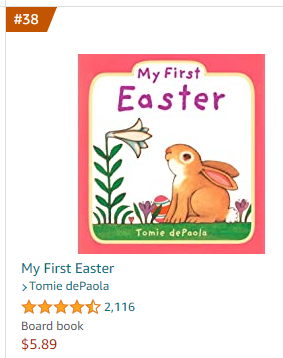 #38 was a board book version of My First Easter which is also by Tomie dePaolo, The hardcover edition of that book was first published in 1990. 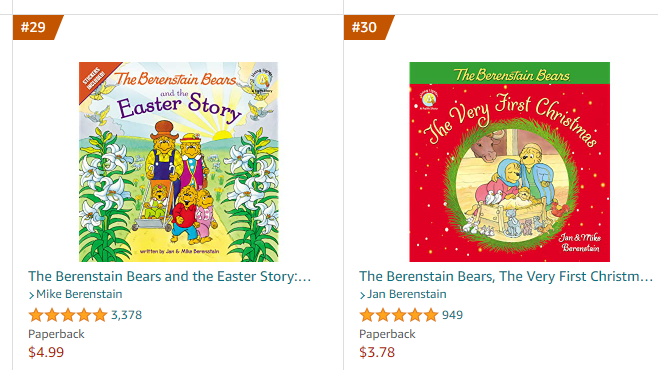 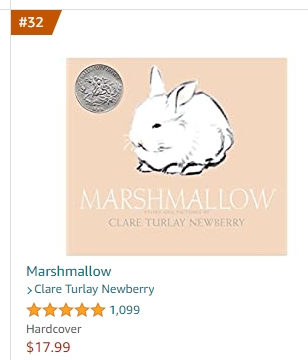 On August 5, the hardcover version of Marshmallow was #32. Again, that is an oldie but goldie, and it won the Caldecott award in 1943. The paperback version of this book was #5 on August 5. 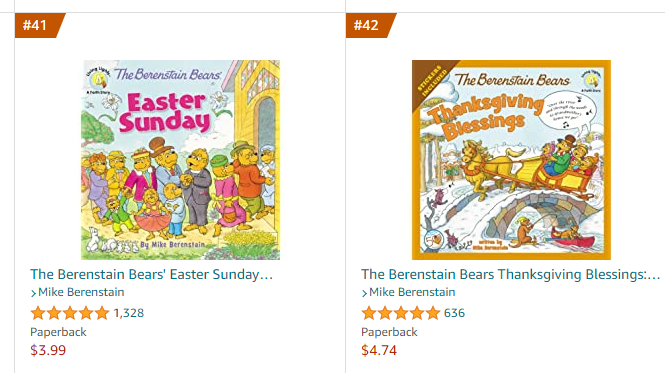 The Bears also claimed spots #41 and #42. Both of these books were paperback books. 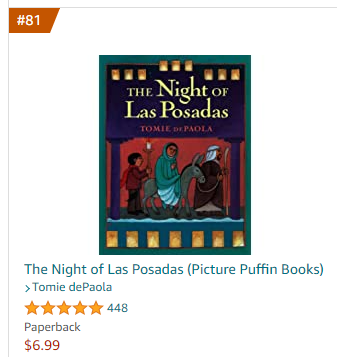 The paperback version of The Night of Las Posadas claimed the #81 spot on August 5. This is another book by Tomie dePaola, and the original version of that book was published in 1999. 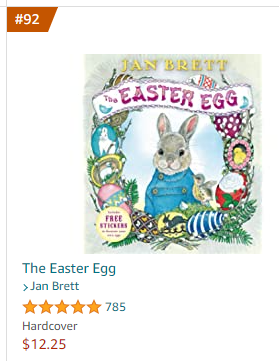 In summary: On August 5, Donkey’s Song was #29 out of the Top 100 books in Children’s Christian Holiday Fiction Books, but that list is comprised of some steep competition. Tomie dePaola is in 4 of those 100 spots, and The Berenstain Bears books are in 5 of those 100 books. The giant Christian writer Max Lucado has 1 of those spots. A Caldecott award winner has one of those spots, and an ECPA BESTSELLER that has sold well over a million books is in one of those spots. The publishing legend Jan Brett is in one of those top 100 spots, too. On this list of classics, I feel that it is a miracle that Donkey is on the list at all, and here is the Biggie: Donkey is the ONLY  book on that list that hasn’t been released to the public yet. Now that is another miracle for my Donkey. Thank you, Friends. That is because many of you have pre-ordered Donkey, which will not ship until October 11.

After taking a peek at only 1 of the categories of Amazon’s Best Seller, I’ll swing to the very top of Amazon Marketing–the Amazon Charts, The Amazon Charts is the Mother of All Lists, but unlike the other lists, the Charts reflect sales over an extended period of time. During the week of August 5, 2022,  Where The Crawdads Sings is number one on the Amazon Charts and it has been there quite some time. 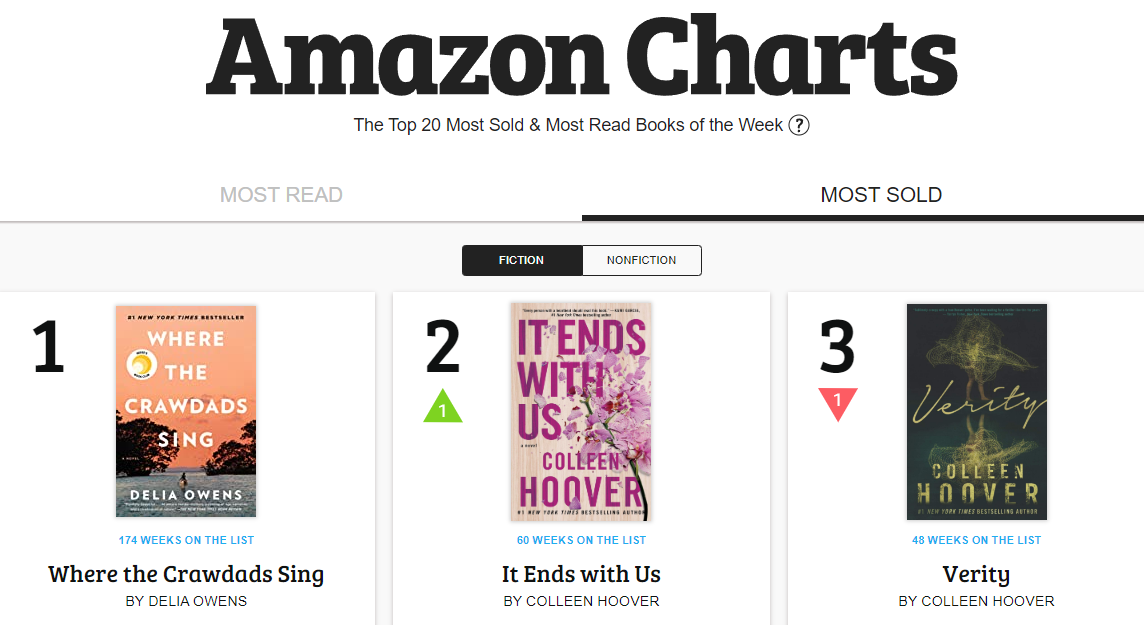 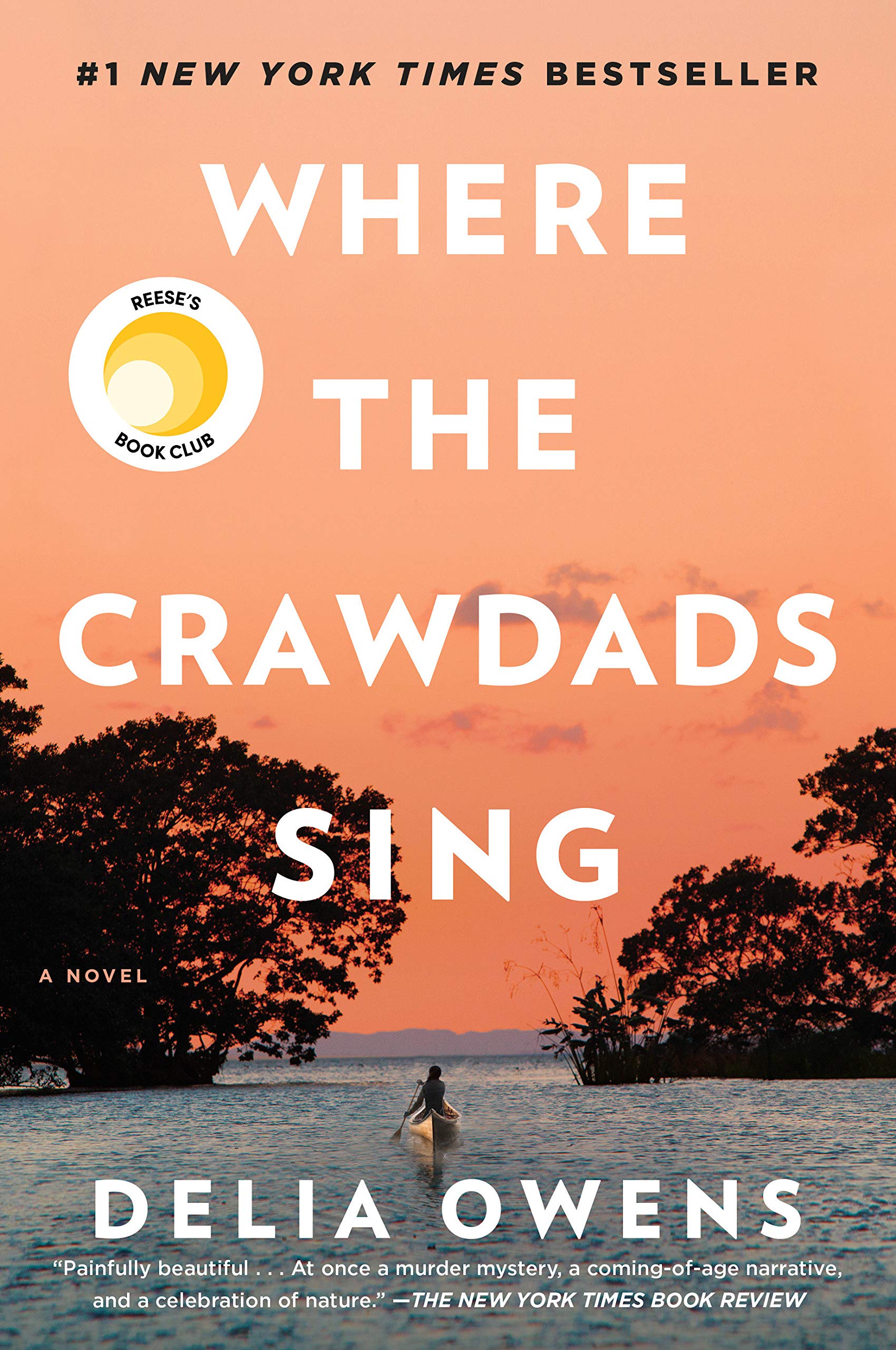 “The original novel was released in August 2018 and got an instant boost when Reese Witherspoon selected it for her book club. Where the Crawdads Sing would go on to become Amazon’s most sold fiction release for 2019. The premiere of the new film has now propelled Where the Crawdads Sing back to the top of the Amazon charts.” Rolling Stone

Once again, the Amazon lists are not the same as the Amazon Charts. Most writers would give almost anything to get on the Amazon list of The Top 100 Books –That list includes all types of books, i.e. picture books, chapter books, adult books, teen books, nonfiction books, paperback books, books on kindle, hardcover books, and on and on and on.  It is interesting to note that 1 book title might take several places on any list. On August 5, 2022, when I am compiling this report, the movie Where the Crawdads Sing has recently been released to the theaters, and it has been a smash hit. That sort of thing will re-spark a book’s sale ratings. Crawdads has been a New York Times Best Seller, and also an Amazon Best Seller. On August 5, 2022, the title Where The Crawdads Sing has claimed 2 of the Top 100 Book Spots.

On the same day, the Kindle version of Crawdads was #27.

Bottom line: Crawdads is on the Top 100 list in least 2 places. There can only be 98 more books on that list, but in reality, several titles hold multiple spots. Although there are 100 top books, there won’t be that many titles.

Other Amazon Lists of Bestsellers

On August 5, 2022, Where the Crawdads Sing was on other Amazon lists: It was  #6 in Coming of Age Fiction Books, #9 in Literary Fiction Books, and #10 in Mothers & Children Fiction. Those are sort of subdivisions on the Amazon Lists. Children’s Christian Fiction is another one of those subdivisions, and that is where Donkey is truly singing his song.