Because of the coronavirus, it hardly seems like it, but Easter is only a few days away. Life has been trimmed down for most Americans, but I am recalling the Easter that I spent in Guatemala and had the honor of visiting the village of Antigua at Easter. That was the Easter that I saw how the native people of Guatemala, who are truly impoverished, celebrate the death and return of Jesus. The experience was truly humbling.

If I had visited Guatemala at any time other than when I did, I would have had difficulty saying what I loved most about the country. The countryside is a natural wonder. In the jungle areas, the monkeys and the brightly colored birds fill the trees. But my visit was during Easter, and Providence provided me with an even greater spectacle. I had a front-row spot, where I witnessed the most incredible display of religious devotion that I have ever seen in my life.

Apparently, many of the Guatemalans live in the hills outside of the towns, but a day or two before Easter, the native people converged upon Antigua and began to prepare to celebrate the crucifixion and resurrection of Jesus and the sacrifice made both by Jesus and by his mother, Mary.

To set the stage, allow me to point out that the native people did not come to Antigua and stay in hotels. In fact, they didn’t even have tents. They merely congregated. They brought baskets of food with them, and they built fires in the street to cook it. If they slept at all, they probably slept where they cooked.

After they arrived for the Easter celebration, the Guatemalans built long wooden frames that stretched from one end of town to the other, and with precision, the Indians filled the frames with intricate designs made of colored sawdust and sand.

And the next day, the men, boys, women, and girls put on their black and purple mourning clothes and lined up for the honor of carrying massive floats THROUGH the incredible designs that they had created in the streets. 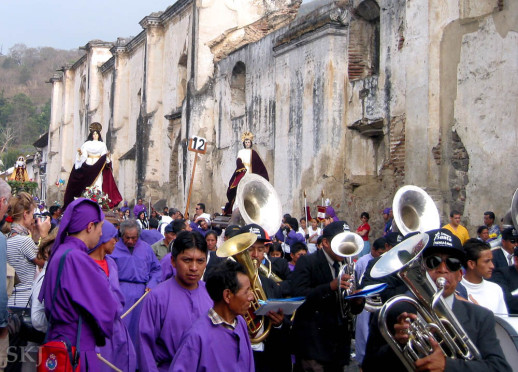 A small band formed and began to play some of the most cacophonous and yet, the most beautiful tweets, honks, thumps, and drones that I have ever heard. I remembered the scripture: 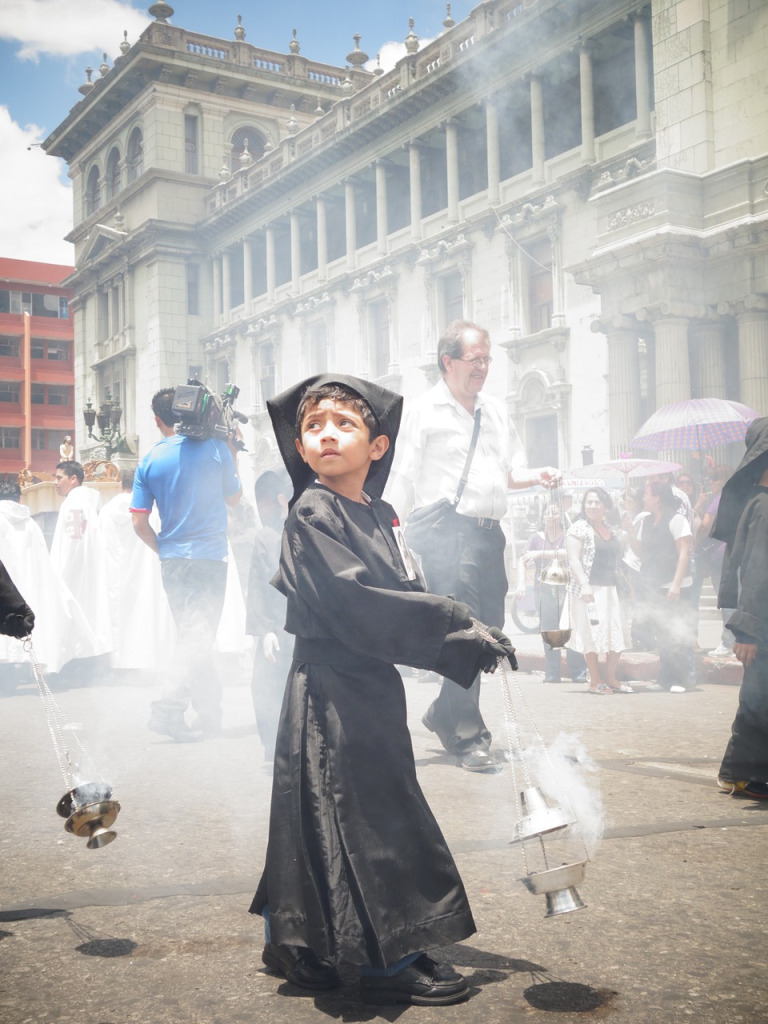 I felt that the honest and plain people of Guatemala were putting their best efforts into offering praise. No doubt, they had saved their very best outfits for this day.

The oldest men were allowed the privilege of standing closest to the statue of Jesus,

And the oldest women were allowed the privilege of standing closest to Mary.

I watched the earnestness with which these people worshiped and offered thanksgiving, and I was ashamed. On Easter Day in Antigua, I had seen a living example of the parable of the Widow’s Two Mites, and I was truly humbled.

21 And He looked up and saw the rich putting their gifts into the treasury,2 and He saw also a certain poor widow putting in two mites. 3 So He said,“Truly I say to you that this poor widow has put in more than all; 4 for all these out of their abundance have put in offerings for God,[a] but she out of her poverty put in all the livelihood that she had.” Luke 21: 1-4