Over the past week, I have explored the theme of darkness in literature.  In the Bible, we are told that in the beginning, the world was nothing but darkness. There was no moon. There was no sun. We are told that water moved across the darkness at that time, and therefore, I imagine that in the very beginning, the world was cold and damp and unpleasant. Even today, I associate total darkness with wickedness and evil. I associate a lack of light with the creepy night alleys where crime takes place. From the very beginning, God knew that the world needed light, and in the first passage of the Bible, God created light to suspend the darkness: “In the beginning, God created the heavens and the earth. The earth was formless and void, and darkness was over the surface of the deep, and the Spirit of God was moving over the surface of the waters. Then God said, “Let there be light”; and there was light. God saw that the light was good, and God separated the light from the darkness. God called the light day, and the darkness He called night. And there was evening and there was morning, one day.” Genesis 1:1-5 New American Standard Bible 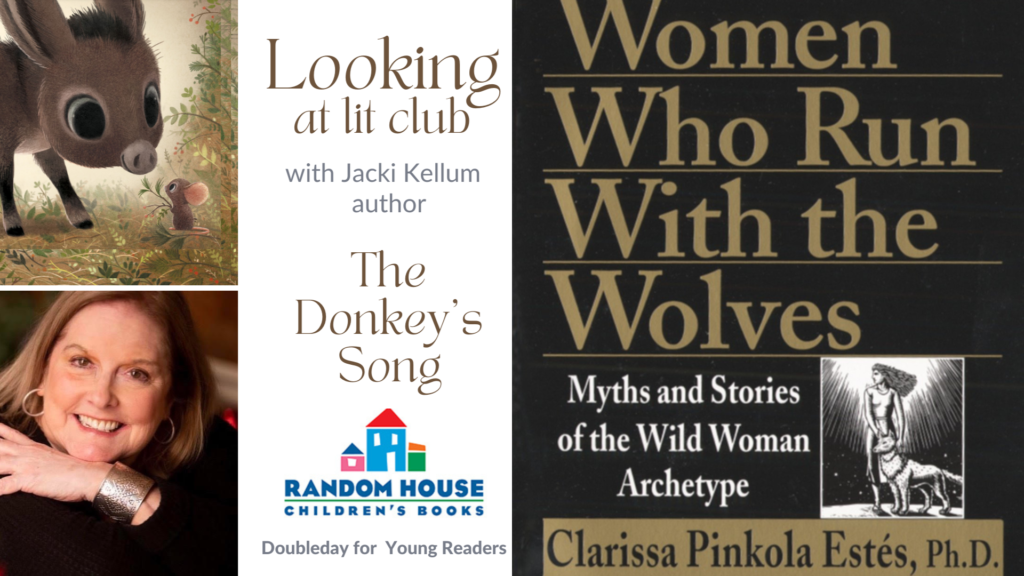 In her book Women Who Run With the Wolves, Estes describes a type of darkness that falls upon a person who has lost inner vision. She tells us that because women have been stuffed into corners of non-existence, they have suffered the most from their losses of inner vision and that they often wander aimlessly in search of that vision.

“The longing comes when one realizes one has given scant time to the mystic cookfire or to the dream- time, too little time to one’s own creative life, one’s life work, or one’s true loves.” ― Clarissa Pinkola Estés, Women Who Run With the Wolves: Myths and Stories of the Wild Woman Archetype

Estes says that within women, even the most stifled of women, there remains a spark of the unharnessed, unstifled natural wildness. She calls the unbridled woman the wolf woman or the Wild Woman, and in her book Women Who Run With the Wolves, she addresses the longing that lies within women to return to that primal, wolf-woman state.

“Fortunately, no matter how many times she is pushed down, she bounds up again. No matter how many times she is forbidden, quelled, cut back, diluted, tortured, touted as unsafe, dangerous, mad, and other derogations, she emanates upward in women, so that even the most quiet, even the most restrained woman keeps a secret place for Wild Woman, Even the more repressed woman has a secret life, with secret thoughts and secret feelings which are lush and wild, that is, natural. Even the most captured woman guards the place of the wildish self, for she knows intuitively that someday there will be a loophole, an aperture, a chance, and she will hightail it to escape.”
― Clarissa Pinkola Estés, Women Who Run With the Wolves: Myths and Stories of the Wild Woman Archetype

“This wolf-woman Self must have freedom to move, to speak, to be angry, and to create.”
― Clarissa Pinkola Estés, Women Who Run With the Wolves: Myths and Stories of the Wild Woman Archetype

Estes is a Jungian psychologist, and she says that most women are experiencing a feeling of being lost–they are veritable fish out of water–and that they are wandering around seeking to restore their inner lights. She says that women live their lives trying to please others–trying to take care of others–and that they neglect themselves. Becase of that, women often feel that they are in exile.

“It is worse to stay where one does not belong at all than to wander about lost for a while and looking for the psychic and soulful kinship one requires”
― Clarissa Pinkola Estés, Women Who Run With the Wolves: Myths and Stories of the Wild Woman Archetype

I’ll be diving deeply into Women Who Run With the Wolves. The book talks about several issues that creep into literature over and over again. For starters, the picture book Stellaluna touches upon the existence that is forced upon people who are exiled from their true selves.