Last night I re-watched the movie Mona Lisa Smile. It is hard to believe that this movie first came out 18 years ago, and I had watched it at least 18 times before last night. When I saw that the movie was playing on my television again, I almost skipped it, but I’m glad that I didn’t. Perhaps the time was right, but for some reason, this time I took notes throughout the movie, and I listed some of the reasons that I have always been touched by this movie’s message.

First, Katherine Ann Watson, who is played by Julia Roberts, is an art history teacher. Because I have a master’s degree in art, I relate to that.

Second, Katherine Ann is a free thinker from California who goes to the ultra-tight Wellesley College to teach. She becomes a culture buster.

Third, the movie is set during the 1950s, and I was born in 1950. I began college at Ole Miss in 1968, and Ole Miss was at least 10 years behind the colleges in the East. In 1968, Ole Miss was also extremely tight and proper and closed to new ideas. In addition, at that time, Ole Miss was not a good place for people from other cultures to attend college, and I had grown up in the rural Bootheel of Southeast Missouri, which was a totally different culture than Ole Miss.

Fourth, I have always been a freer thinker than most of the people around me. Decades after the 1960s and after my time at Ole Miss, that is still the case.

Fifth, after college, I began teaching art in Mississippi, and like Katherine Ann, I often found myself bucking the system as I taught. Like Katherine Ann, I resisted the idea that I needed to prepare a lesson plan and to rigidly adhere to it. When I taught art, I always felt that every day and every class was an opportunity all unto itself. I have always been a thinker, and when I taught art, I could not make myself avoid the teaching of my thinking, too. I always felt that I needed to respond, in the moment, to what was happening at that moment. I always felt to be more intuitive about my responses. 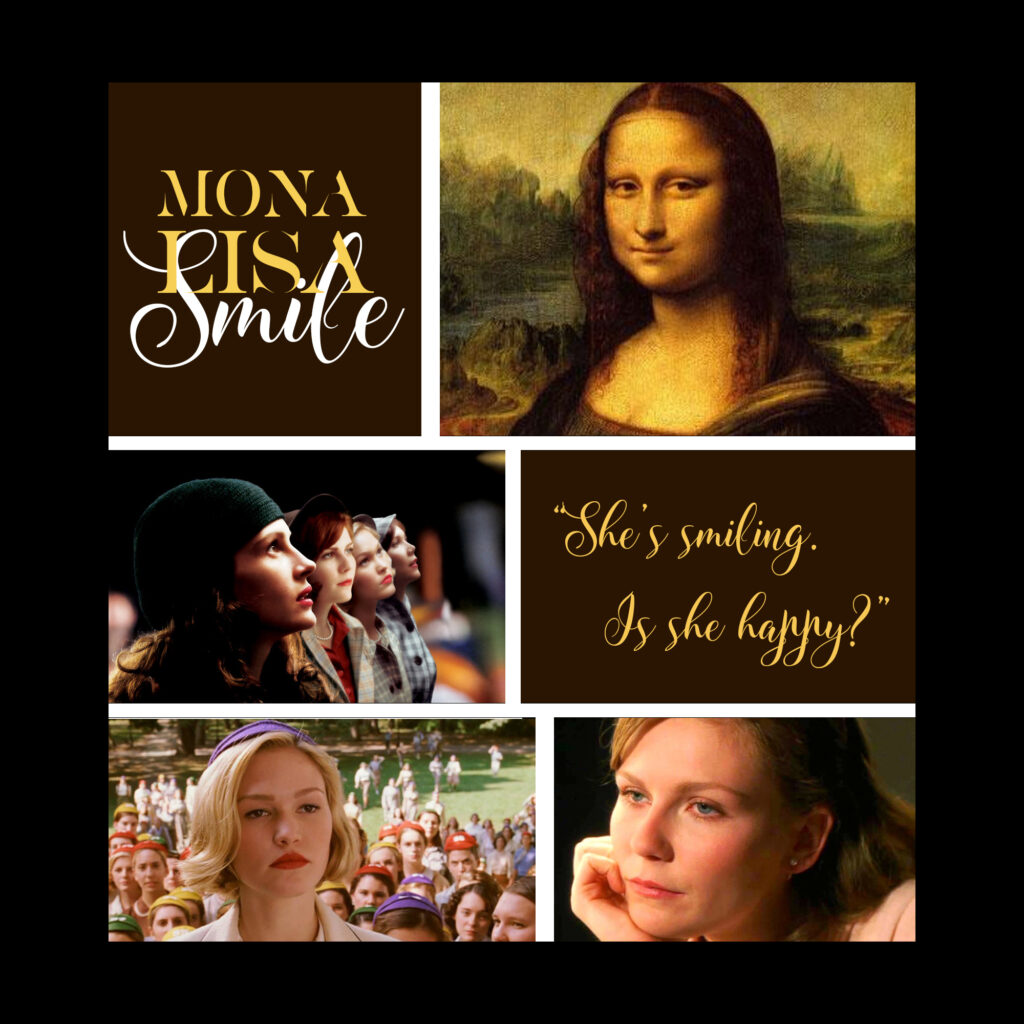 “She’s smiling. Is she happy?”

Plot of the movie Mona Lisa Smile – In the fall of 1953, in the prestigious Wellesley women’s college arrives a new history teacher, Katherine Watson, who has reformist ideas and upsets the dull, repressive and conformist university’s atmosphere, teaching her students how to enlarge their horizons for a future life that doesn’t have to be confined in the role of a wife and a perfect host. Movie Quotes Here

I began teaching in 1972, and although most of the people in Mississippi were somehow shielded from it, much of the rest of the USA was questioning all sorts of things, and I found myself questioning many things, too. In my art classes, I, like Katherine Ann, found myself asking the question: “What IS art?:

“What is art? What makes it good or bad, and who decides?”
JULIA ROBERTS – Katherine Ann Watson

Kirsten Dunst plays Betty Warren, who is the voice of arrogant culture-as-it-is. She counters Katherine Ann’s new ideas with:

“Art isn’t art until someone says it is.”
KIRSTEN DUNST – Betty Warren

referring to a childlike drawing of a cow

And as Katherine Ann introduces the concept that art itself may not be what most of the word seemed to think that it might be, she challenged the idea that perhaps many of the establishment’s ideas might be a bit off. She urges her students toquit following the herd and to think for themselves:

“Katherine Ann Watson: You can conform to what other people expect of you, or…

Betty Warren: Be ourselves?” 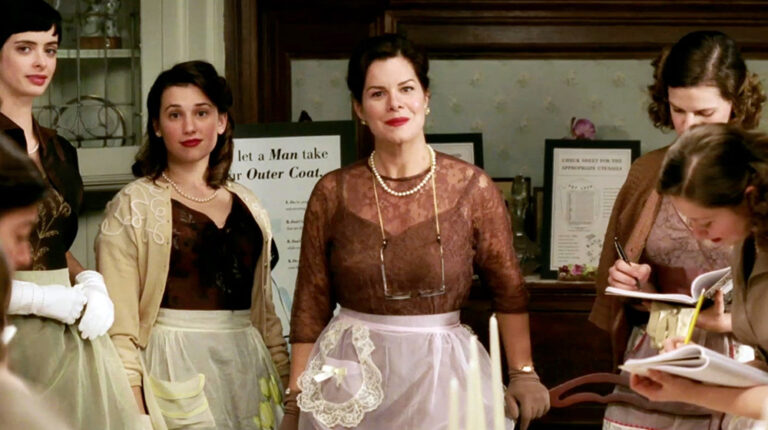 And here it comes! The ladies at Wellesley were primarily there to learn how to be proper wives.

“While our mothers were called to the workforce for lady liberty it is our duty, obligation to reclaim our place in the home bearing the children that will carry our traditions into the future.”
KIRSTEN DUNST – Betty Warren

And Katherine Ann proposed that the students look for more both in art and in life.

“I thought that I was headed to a place that would turn out tomorrow’s leaders, not their wives.”

[talking about the school]

“Look beyond the paint. Let us try to open our minds to a new idea.”
JULIA ROBERTS – Katherine Ann Watson

To support her claim that art may be more than what the people around you say that it is, Katherine Ann shows one of Van Gog’s self-portraits and opines that even though Van Gogh was not accepted by his peers and even though he never sold a painting during his lifetime, he been considered an artist since then.

“This is his self-portrait. There’s no camouflage, no romance. Honesty.”

“He painted what he felt, not what he saw. People didn’t understand, to them it seemed childlike and crude. It took years for them to recognize his actual technique.”

Ultimately, Betty Warren marries the man that she went to Wellesley to find, and the man is unfaithful to her. Betty’s very proper mother tells Betty to get over it and to continue in her farce of a marriage. She essentially says: “Live with it, just like all the rest of us wives have done.”

But Betty Warren does not live with her mistakes. She changes. She moves in a different direction.

“Not all who wander are aimless. Especially not those who seek truth beyond tradition; beyond definition; beyond the image.”
KIRSTEN DUNST – Betty Warrem

“I wanted to make a difference. But to change for others is to lie to yourself.”
KIRSTEN DUNST – Betty Warren