[Just a note for anyone who is immediately turned off by the word “Pagan.” You might need to consider your prejudices again. I grew up as a Christian, but many years ago, I leaned that in most cases, Christian holidays are repurposed from Pagan tradition.  Winter Solstice was called the Yule by the Pagans. Does that ring a bell?  “Fa la la la la….Troll the ancient Yuletide carol….” The early Christians implemented the traditional Pagan feast times–to preserve something of their own heritage and to make themselves more appealing to potential converts.]

Like most creative people, I do not plow steadily through life. Rather,  I ebb and I flow–or I create and I lie fallow. I have several creative solstices within myself each year, and I somehow understand that Winter Solstice is a celebration of the fallow, non-productive  periods of growth. We must remember that it is after and somehow because of our unproductive periods that we are restored. I am reminded of the Zen philosophy of the importance of emptying the full teacup. The Full Teacup is a Zen story that illustrates the need for emptying.

A man who was believed to be powerful and wise came to the Zen master to learn something new. Apparently, the student began by reciting to the master some of the things that he already knew. Apparently, he was trying to impress the master with the depth of his knowledge. After the Zen master listened for a moment, he said, “Let’s begin our session with a cup of tea.”

The master filled the student’s cup with tea, but he did not stop pouring. Tea flowed from the cup and ran across the floor. The student said, “Stop, the cup is full.”

The Zen master responded, “Exactly. Your mind is like the full cup of tea. I cannot teach you anything until you empty your mind and open yourself to something new.”

When we sit down to write or paint, we often feel that we have nothing new to say. That is because our minds are filled with stale, lifeless thoughts. Before we can begin to discover what we want to create, we must expel what is stagnant inside ourselves and allow an empty space to lie within our consciousnesses.

In my opinion, Winter Solstice honors the quiet, dark, and empty times in our creative processes, and it ushers forth the time of new light–the time when creation will begin again 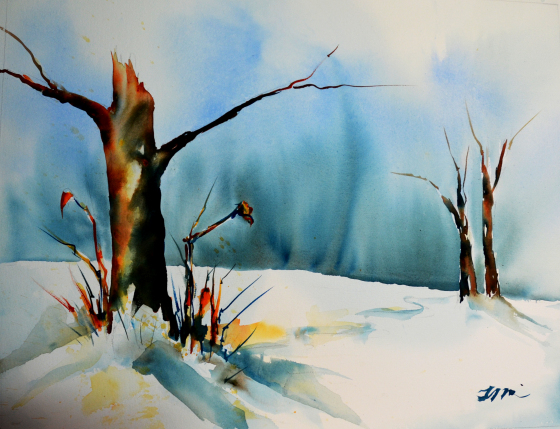 I painted December River before I left New Jersey. I was alone and without family that Christmas, and I listened to Joni Mitchell sing The River.

The River by Joni Mitchell

It’s coming on Christmas,
They’re cutting down trees.
Putting up reindeer
Singing songs of joy and peace,
Oh, I wish I had a river I could skate away on.

Many people experience depression and seasonal disorders around the Christmas and Holiday seasons. While the depression might become almost unbearable at times, it might be helpful to realize that is always the darkest just before dawn. Winter Solstice is in some ways about that darkness within ourselves, but be assured in knowing that just after Winter’s Solstice, a new light begins.