Skip to content
Your journal assignment for today is to describe the terrain or the countryside of the area around your childhood home. When I say describe, I mean just that. Provide sentences that capture how the countryside looked. Don’t just say: “I grew up 40 miles south of Fort Smith, Arkansas. Fort Smith has a population of 88,000 people, but my town only has 1500 people.”

If you talk about the trees around your childhood home, say exactly what kind of trees grew there and describe them. For example, you might say that scrubby wild cedar trees dotted the rugged land around your house. Sprigs of lacy, bluish greenery sprang from each tree in a haphazard way that turned the hillsides into feathery festoons. I know that is a bit much, but I wanted to give you an idea of how to write a description.
You might say that a grove of majestic hickory trees grew around your house. During the fall, a mass of golden leaves formed a net across the sky. When the sun hit the leaves just right, the light was almost blinding, and as the leaves floated to the ground, they looked like golden pennies, falling from the clouds.

On the other hand, you might have grown up where I grew up, in cotton-growing farmland, where hardly any trees grew at all. The dark, rich soil around my house was too valuable to designate much space for trees. During the fall, the land around my childhood home was covered by waves of white cotton–miles and miles of cotton–as far as my eyes could see. 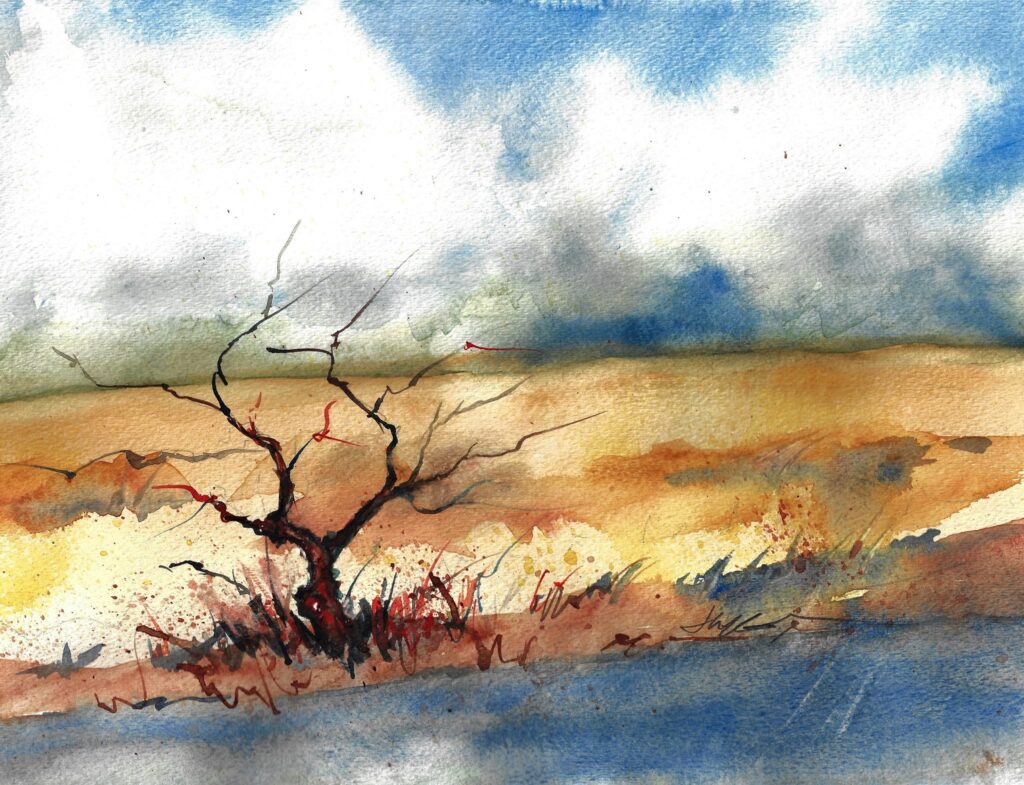 One Ditch – Jacki Kellum Watercolor Painting
Occasionally, a ditch etched a path through the cotton fields, and a few scrappy bushes grew along its banks, but other than that, there were not many trees on the farms around my house. After the cotton was harvested, the land around my childhood home looked like The Wasteland. 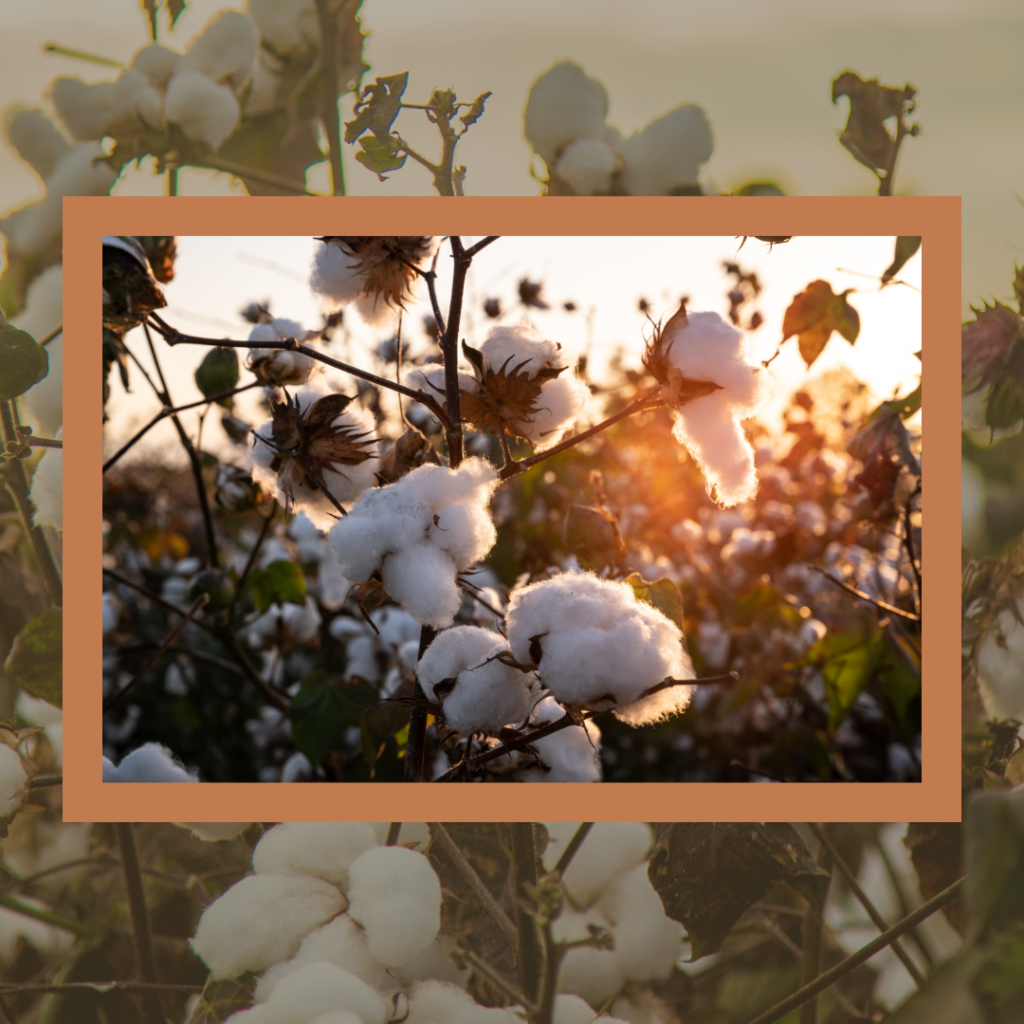 My childhood was determined by Cotton, and my calendar was punctuated by the various stages of its growth cycle. The winter was slow and quiet. Spring was an awakening, and summer was a time of growth. During fall, the roads were lined with wagons, in ant-like procession, going to and coming from the gins. Living became the everyday humming of the harvesting of cotton.

The river ebbed and flowed, and the air was filled with gossamer-like lint, floating from the cotton compresses. Like a spider’s work, it attached itself to trees, poles, and other things nearby. Gauzy and ghostly, the lint webs were warning us, hinting at what would come. 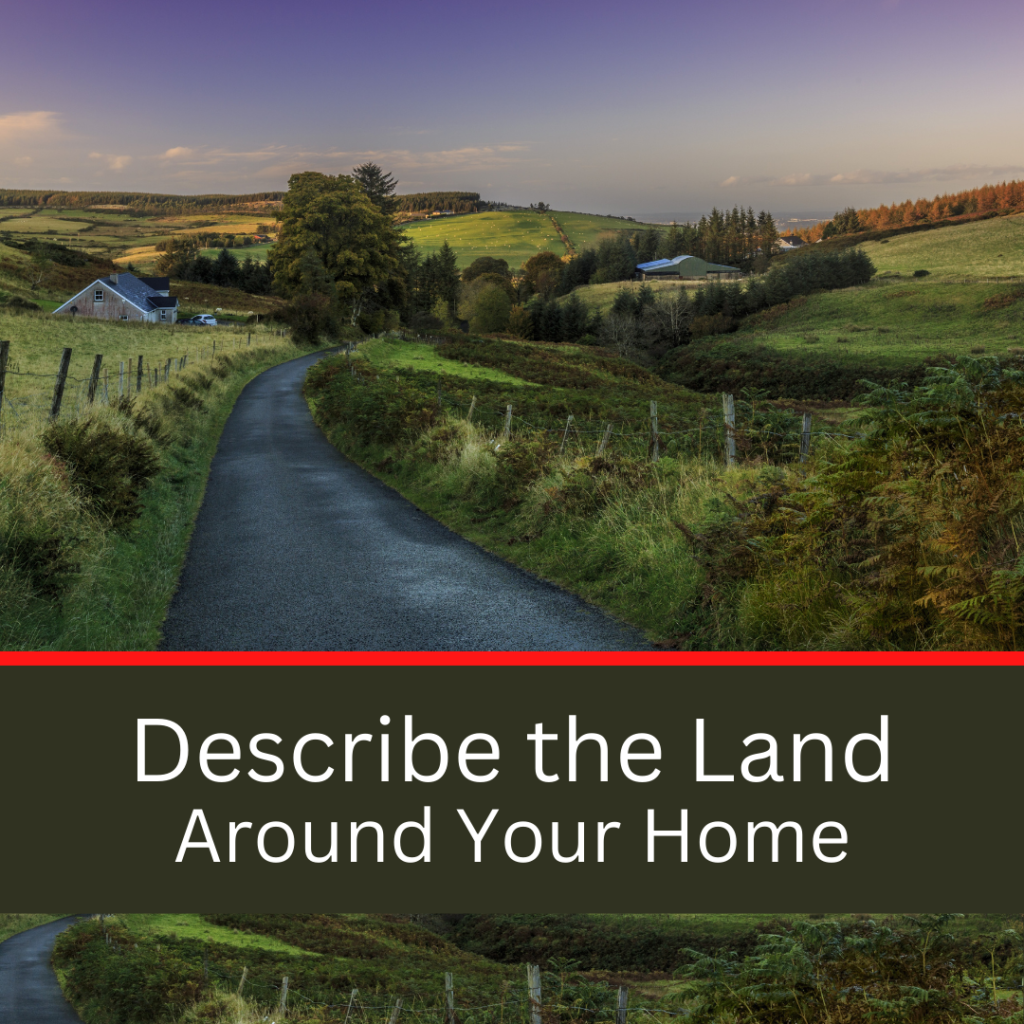 The area around my childhood home was flat. The land where I live now is hilly to mountainous. If there is any rich soul in the Ozarks, you need a bulldozer and an awl to access it. Most of the land in the Ozarks is like bedrock. The terrain here is beautiful, but this is not a place where anyone would want to grow vast fields of cotton. For 18 years, I lived on the New Jersey shore. That land is sandy, and shrieking seagulls commandeer the sky.

You cannot paint every setting with one brush. You must look critically at what is around you, and you must describe it specifically and accurately in your writing