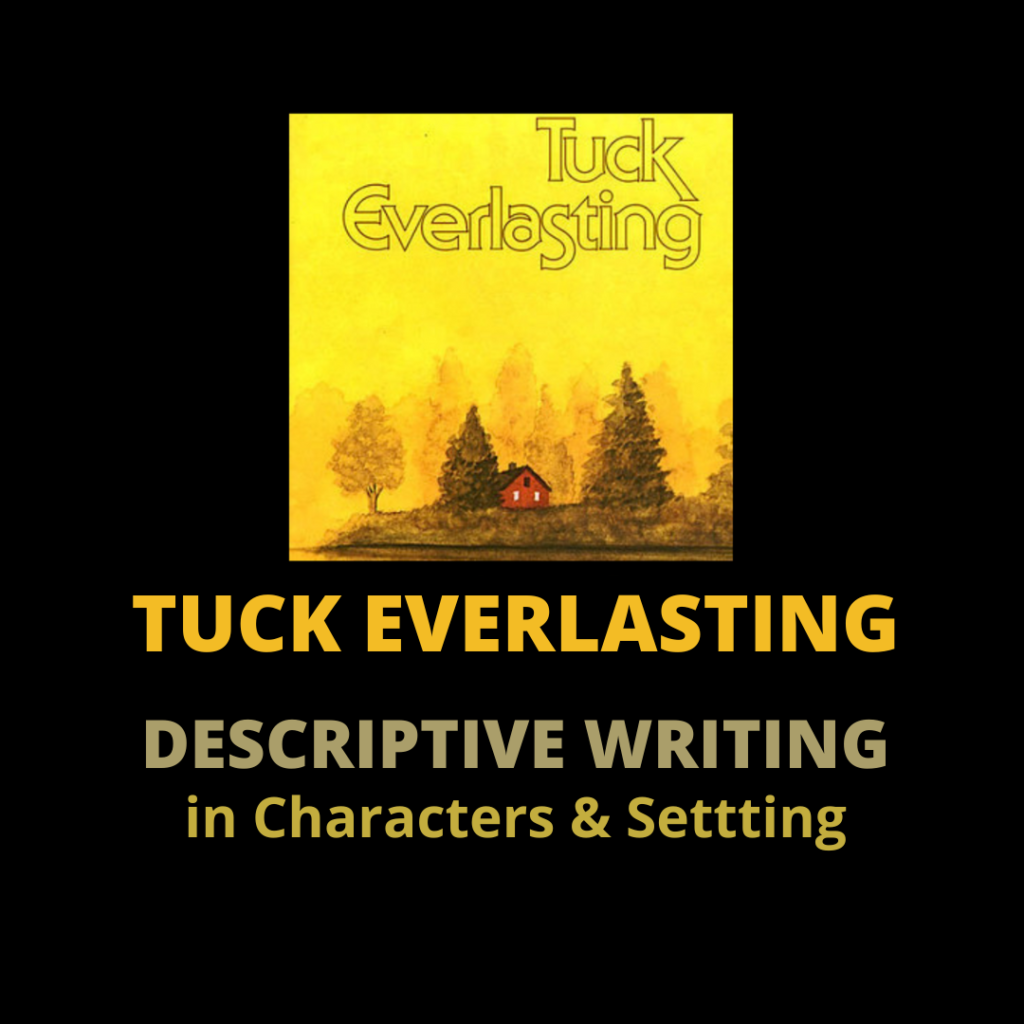 “The first week of August hangs at the very top of summer, the top of the live-long year, like the highest seat of a Ferris wheel when it pauses in its turning. …the first week of August is motionless, and hot.  It is curiously silent, too, with blank white dawns and glaring noons, and sunsets smeared with too much color. Often at night there is lightning, but it quivers all alone. There is no thunder, no relieving rain. These are strange and breathless days, the dog days…” Babbitt, Tuck Everlasting

“1
The road that led to Treegap had been trod out long before by a herd of cows who were, to say the least, relaxed. It wandered along in curves and easy angles, swayed off and up in a pleasant tangent to the top of a small hill, ambled down again between fringes of bee-hung clover, and then cut sidewise across a meadow. Here its edges blurred. It widened and seemed to pause, suggesting tranquil bovine picnics: slow chewing and thoughtful contemplation of the infinite.” Babbitt, Tuck Everlasting

“On the other side of the wood, the sense of easiness dissolved. The road no longer belonged to the cows. It became, instead, and rather abruptly, the property of people. And all at once the sun was uncomfortably hot, the dust oppressive, and the meager grass along its edges somewhat ragged and forlorn. On the left stood the first house, a square and solid cottage with a touch-me-not appearance, surrounded by grass cut painfully to the quick and enclosed by a capable iron fence some four feet high which clearly said, “Move on—we don’t want you here.” Babbitt, Tuck Everlasting

“Mae Tuck climbed out of bed and began to dress: three petticoats, a rusty brown skirt with one enormous pocket, an old cotton jacket, and a knitted shawl which she pinned across her bosom with a tarnished metal brooch. … Mae sat on the edge of the bed and pulled on a pair of short leather boots so thin and soft with age it was a wonder they held together. Then she stood and took from the washstand beside the bed a little square-shaped object, a music box painted with roses and lilies of the valley. It was the one pretty thing she owned…Then, last of all, she pulled down over her ears a blue straw hat with a drooping, exhausted brim. But, before she put on the hat, she brushed her gray-brown hair and wound it into a bun at the back of her neck. She did this quickly and skillfully without a single glance in the mirror.” Babbitt, Tuck Everlasting

“He was remarkably tall and narrow, this stranger standing there. His long chin faded off into a thin, apologetic beard, but his suit was a jaunty yellow that seemed to glow a little in the fading light. A black hat dangled from one hand, and as Winnie came toward him, he passed the other through his dry, gray hair, settling it smoothly. “Well, now,” he said in a light voice. “Out for fireflies, are you?” … His tall body moved continuously; a foot tapped, a shoulder twitched.  And it moved in angles, rather jerkily. But at the same time, he had a kind of grace, like a well-handled marionette. Indeed, he seemed almost to hang suspended there in the twilight….His yellow suit seemed to surprise her….” Babbitt, Tuck Everlasting

“It was another heavy morning, already hot and breathless, but in the wood the air was cooler and smelled agreeably damp. Winnie had been no more than two slow minutes walking timidly under the interlacing branches when she wondered why she had never come here before. “Why, it’s nice!” she thought with great surprise. For the wood was full of light, entirely different from the light she was used to. It was green and amber and alive, quivering in splotches on the padded ground, fanning into sturdy stripes between the tree trunks. There were little flowers she did not recognize, white and palest blue; and endless, tangled vines; and here and there a fallen log, half-rotted but soft with patches of sweet green-velvet moss. And there were creatures everywhere. The air fairly hummed with their daybreak activity: beetles and birds and squirrels and ants, and countless other things unseen, all gentle and self-absorbed and not in the least alarming.” Babbitt, Tuck Everlasting

“The August sun rolled up, hung at mid-heaven for a blinding hour, and at last wheeled westward before the journey was done. … The pastures, fields, and scrubby groves they crossed were vigorous with bees, and crickets leapt before them as if each step released a spring and flung them up like pebbles. But everything else was motionless, dry as biscuit, on the brink of burning, hoarding final reservoirs of sap, trying to hold out till the rain returned, and Queen Anne’s lace lay dusty on the surface of the meadows like foam on a painted sea.
It was amazing, then, to climb a long hill, to see ahead another hill, and beyond that the deep green of a scattered pine forest, and as you climbed, to feel the air ease and soften. …
A wide stand of dark pines rose up, loomed nearer, and suddenly Jesse was crying, “We’re home! This is it…” Babbitt, Tuck Everlasting