January 4 is the birthday of Jacob Grimm. As you probably know, Jacob and his brother Willhelm gave the world the enormous gift of their fairy tales, and today, I want to say Happy Birthday to Jacob, but I am delighted to celebrate the Grimm’s Fairy Tales by sharing them as the master illustrator Arthur Rackham brought them to life in Snowdrop. 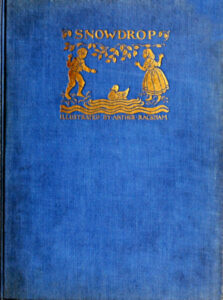 You can read this book online free at Gutenberg Here

Before I go on, however, the title  Snowdrop is a bit misleading. Snowdrop is merely one of the stories in the collection by that name. 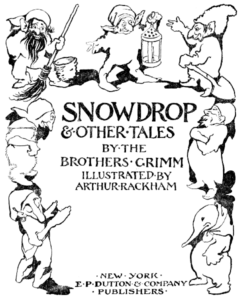 Because you can explore the entire text of Snowdrop online at gutenberg.org, I won’t share the tales here, but because I am also celebrating Arthur Rackham today, I’ll share a few of his illustrations.

I.  Snowdrop [Or Snow White & the Seven Dwarves] 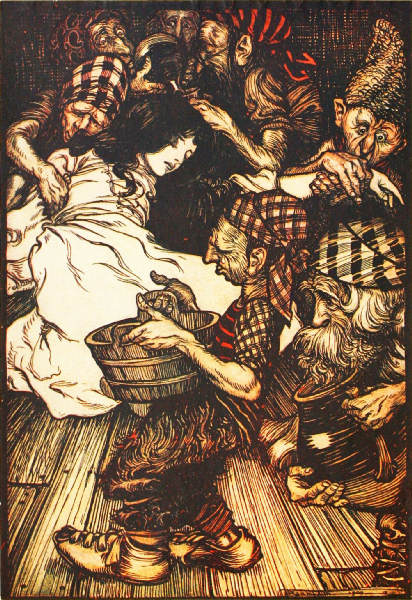 “IT was the middle of winter, and the snowflakes were falling from the sky like feathers. Now, a Queen sat sewing at a window framed in black ebony, and as she sewed she looked out upon the snow. Suddenly she pricked her finger and three drops of blood fell on to the snow. And the red looked so lovely on the white that she thought to herself: ‘If only I had a child as white as snow and as red as blood, and as black as the wood of the window frame!’ Soon after, she had a daughter, whose hair was black as ebony, while her cheeks were red as blood, and her skin as white as snow; so she was called Snowdrop. But when the child was born the Queen died. A year after the King took another wife. She was a handsome woman, but proud and overbearing, and could not endure that any one should surpass her in beauty. She had a magic looking-glass, and when she stood before it and looked at herself she used to say: 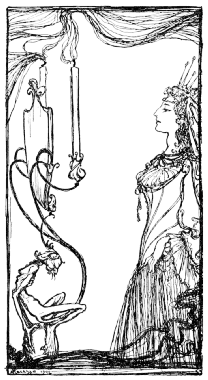 ‘Mirror, Mirror on the wall,Who is fairest of us all?’

then the Glass answered,

‘Queen, thou’rt fairest of them all.’” 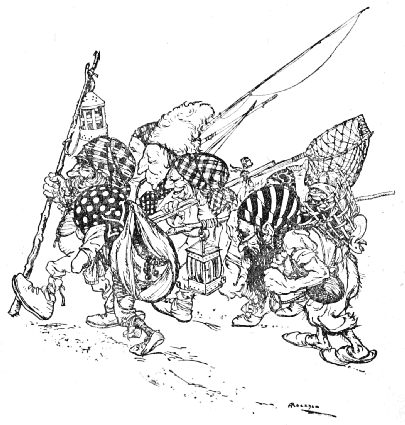 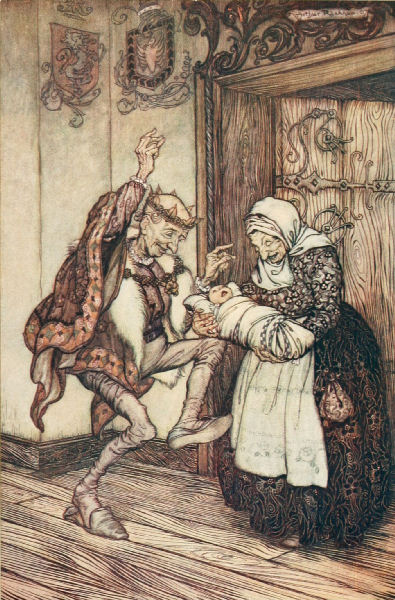 ALONG time ago there lived a King and Queen, who said every day, ‘If only we had a child’; but for a long time they had none.

It fell out once, as the Queen was bathing, that a frog crept out of the water on to the land, and said to her: ‘Your wish shall be fulfilled; before a year has passed you shall bring a daughter into the world.’

The frog’s words came true. The Queen had a little girl who was so beautiful that the King could not contain himself for joy, and prepared a great feast. He invited not only his relations, friends, and acquaintances, but the fairies, in order that they might be favourably and kindly disposed towards the child. There were thirteen of them in the kingdom, but as the King had only twelve golden plates for them to eat from, one of the fairies had to stay at home.

The feast was held with all splendour, and when it came to an end the fairies all presented the child with a magic gift. One gave her virtue, another beauty, a third riches, and so on, with everything in the world that she could wish for.

When eleven of the fairies had said their say, the thirteenth suddenly appeared. She wanted to revenge herself for not having been invited. Without greeting any one, or even glancing at the company, she called out in a loud voice: ‘The Princess shall prick herself with a distaff in her fifteenth year and shall fall down dead’; and without another word she turned and left the hall.

Every one was terror-struck, but the twelfth fairy, whose wish was still unspoken, stepped forward. She could not cancel the curse, but could only soften it, so she said: ‘It [18]shall not be death, but a deep sleep lasting a hundred years, into which your daughter shall fall.’” 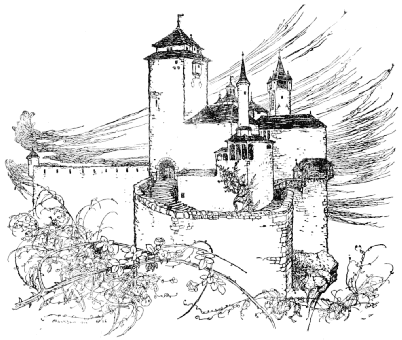 “But round the castle a hedge of briar roses began to grow up.” 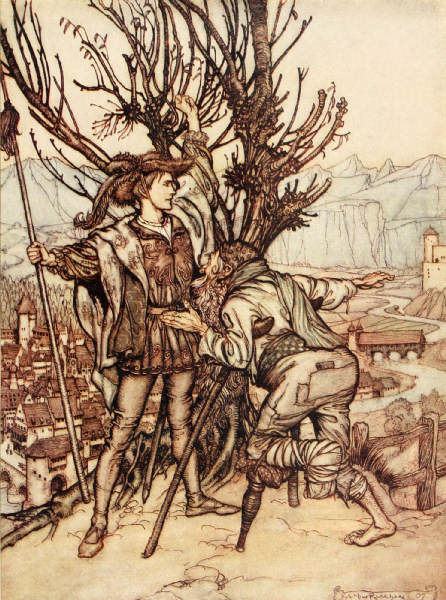 “After many, many years a Prince came again to the country and heard an old man tell of the castle which stood behind the briar hedge….” 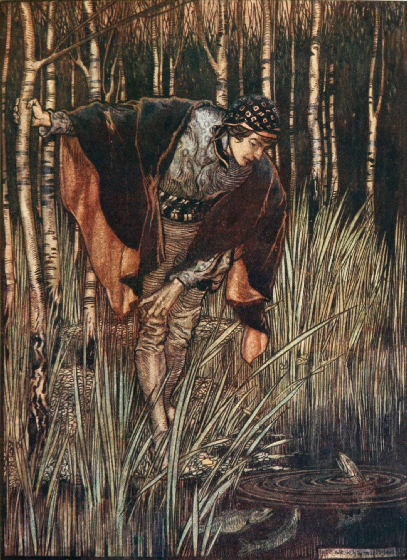 “A LONG time ago there lived a King whose wisdom was celebrated far and wide. Nothing was unknown to him, and news of the most secret transactions seemed to reach him through the air.

Now he had one very odd habit. Every day at dinner, when the courtiers had withdrawn, and he was quite alone, a trusted Servant had to bring in another dish. It was always covered, and even the Servant did not know what it contained, nor any one else, for the King never uncovered it till he was alone. This had gone on for a long time, when one day the Servant who carried the dish was overcome by his curiosity, and took the dish to his own room.

When he had carefully locked the door, he took the dish-cover off, and saw a White Snake lying on the dish.

At the sight of it, he could not resist tasting it; so he cut a piece off, and put it into his mouth.

Hardly had he tasted it, however, when he heard a wonderful whispering of delicate voices.

He went to the window and listened, and he noticed that the whispers came from the sparrows outside. They were chattering away, and telling each other all kinds of things that they had heard in the woods and fields. Eating the Snake had given him the power of understanding the language of birds and animals.” 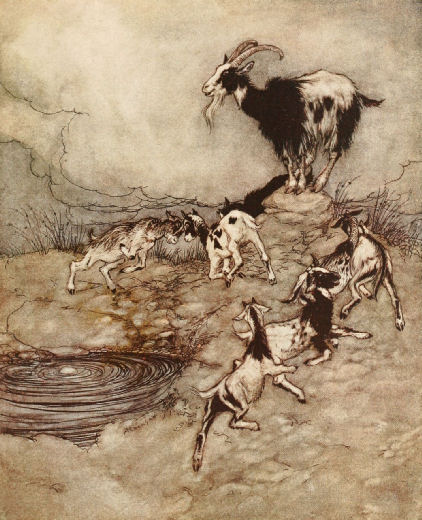 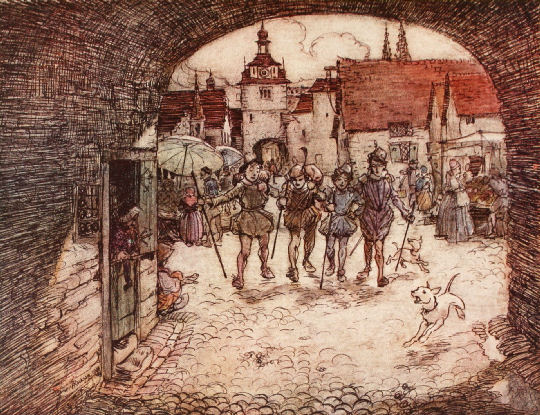 “THERE was once a poor man who had four sons, and when they were grown up, he said to them: ‘Dear children, you must go out into the world now, for I have nothing to give you. You must each learn a trade and make your own way in the world.’

So the four Brothers took their sticks in their hands, bid their father good-bye, and passed out of the town gate.” 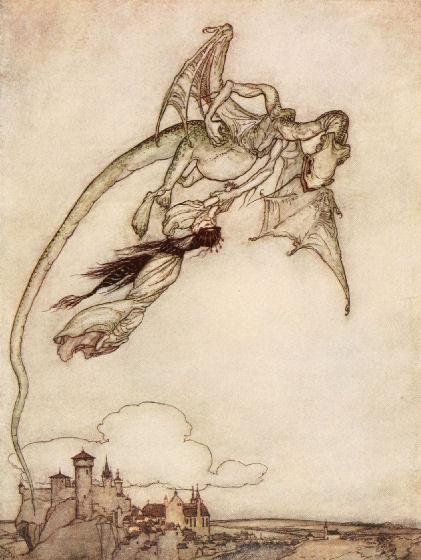 “Not long after this there was a great alarm raised in the country: the King’s only daughter had been carried off by a Dragon. The King sorrowed for her day and night, and proclaimed that whoever brought her back should marry her.

The four Brothers said to one another: ‘This would be an opportunity for us to prove what we can do.’ And they decided to go out together to deliver the Princess.”

VI. The Lady and the Lion 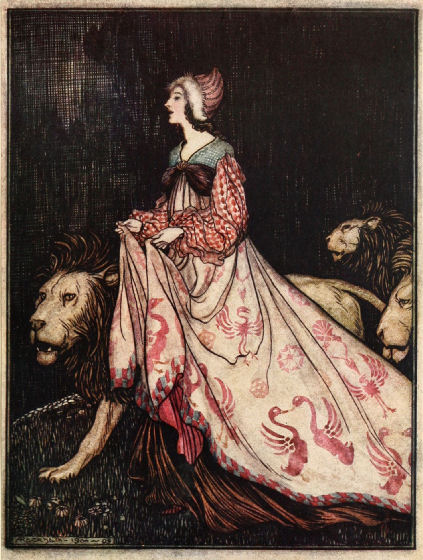 “THERE was once a Man who had to take a long journey, and when he was saying good-bye to his daughters he asked what he should bring back to them.

The eldest wanted pearls, the second diamonds, but the third said, ‘Dear father, I should like a singing, soaring lark.’

The father said, ‘Very well, if I can manage it, you shall have it’; and he kissed all three and set off. He bought pearls and diamonds for the two eldest, but he had searched everywhere in vain for the singing, soaring lark, and this worried him, for his youngest daughter was his favourite child.

Once his way led through a wood, in the midst of which was a splendid castle; near it stood a tree, and right up at the top he saw a lark singing and soaring. ‘Ah,’ he said, ‘I have come across you in the nick of time’; and he called to his Servant to dismount and catch the little creature. But as he approached the tree a Lion sprang out from underneath, and shook himself, and roared so that the leaves on the tree trembled. 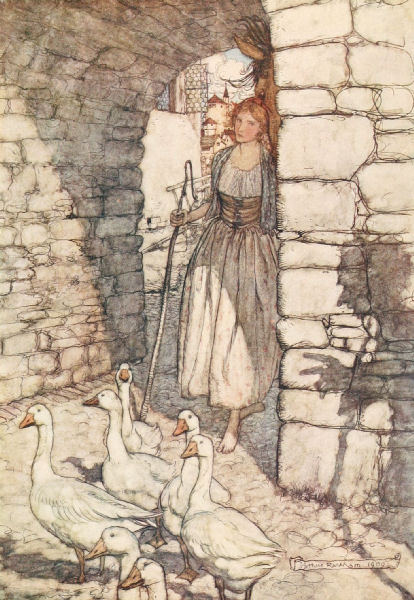 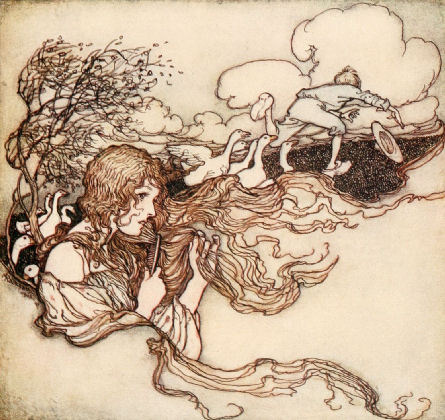 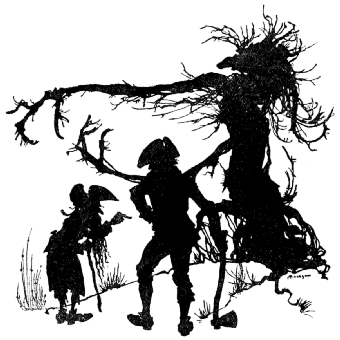 “There stands an old tree; cut it down, and you will find something at the roots.” 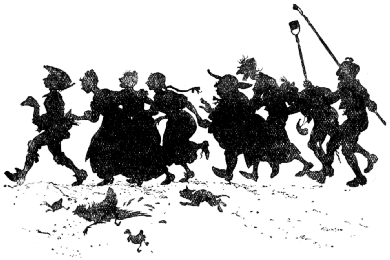 “So now there were seven people running behind Simpleton and his Goose.”

“And so they followed up hill and down dale after Simpleton and his Goose. 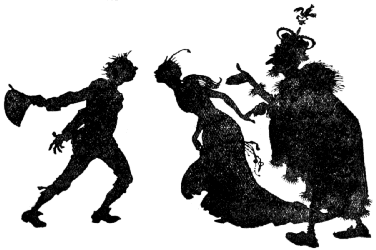 “The King could no longer withhold his daughter.”

IX. The Water of Life 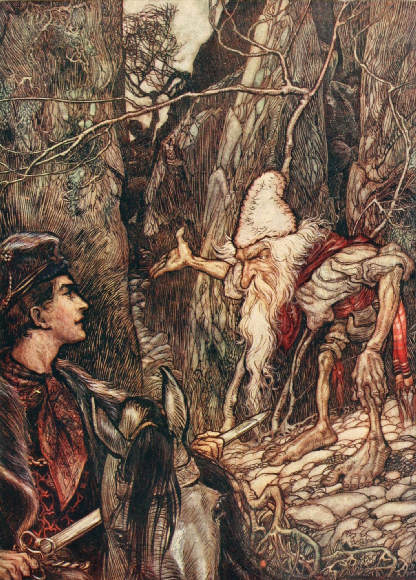 “THERE was once a King who was so ill that it was thought impossible his life could be saved. He had three sons, and they were all in great distress on his account, and they went into the castle gardens and wept at the thought that he must die. An old man came up to them and asked the cause of their grief. They told him that their father was dying, and nothing could save him. The old man said, ‘There is only one remedy which I know; it is the Water of Life. If he drinks of it, he will recover, but it is very difficult to find.’”

X. The King of the Golden Mountain 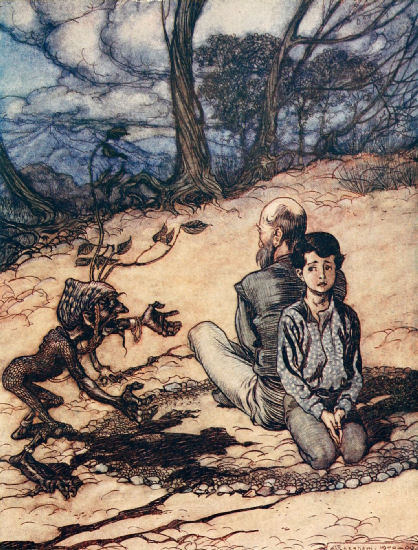 “THERE was once a Merchant who had two children, a boy and a girl. They were both small, and not old enough to run about. He had also two richly-laden ships at sea, and just as he was expecting to make a great deal of money by the merchandise, news came that they had both been lost. So now instead of being a rich man he was quite poor, and had nothing left but one field near the town.

To turn his thoughts from his misfortune, he went out into this field, and as he was walking up and down a little black Mannikin suddenly appeared before him, and asked why he was so sad. The Merchant said, ‘I would tell you at once, if you could help me.’” 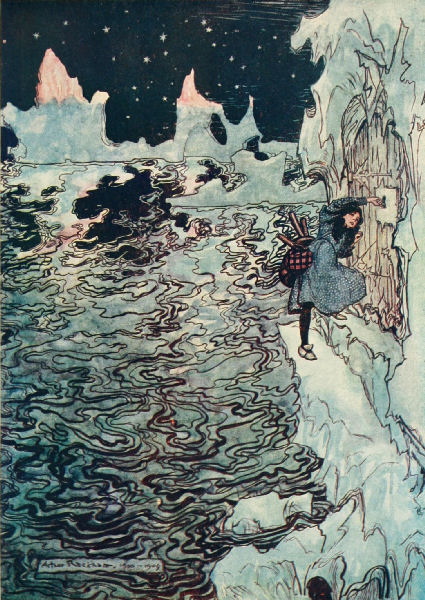 “THERE was once a Man who had seven sons, but never a daughter, however much he wished for one.

At last, however, he had a daughter. …

“She took nothing with her but a little ring as a remembrance of her parents, a loaf of bread against hunger, a pitcher of water against thirst, and a little chair in case of fatigue. She kept ever going on and on until she came to the end of the world.

Then she came to the Sun, but it was hot and terrible, it devoured little children. She ran hastily away to the Moon, but it was too cold, and, moreover, dismal and dreary. And when the child was looking at it, it said: ‘I smell, I smell man’s flesh!’

Then she quickly made off, and came to the Stars, and they were kind and good, and every one sat on his own special seat.

When she had entered, she met a Dwarf, who said: ‘My child, what are you looking for?’

‘I am looking for my brothers, the Seven Ravens,’ she answered. 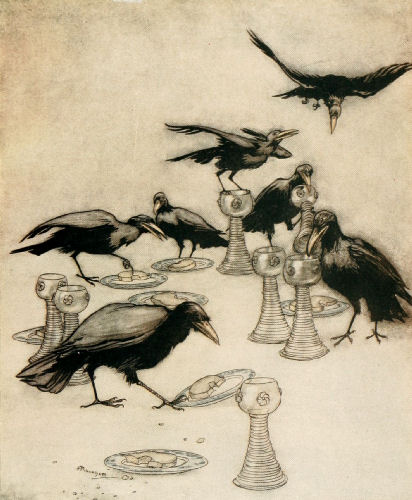 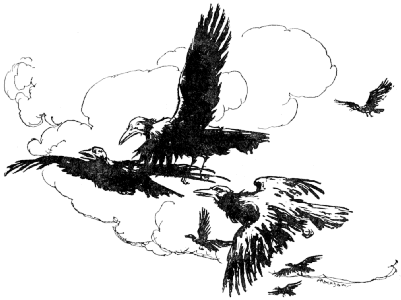